How to easily import x,y,z coordinate data from EXCEL to CAD

Draw your sets of data as CAD entities: polylines or meshes

Do you need to import a series of XLS coordinates points into your drawing, and draw them as a series of POINTs, LINE segments, or 2D or 3D POLYLINEs?

Note: For surfaces you will also need to enter the number of N x M points.

Then, copy your XLS data [set of 2 or 3 columns], all the required range, and paste the data in your CAD’s command line. The data will be automatically catched as it got pasted. 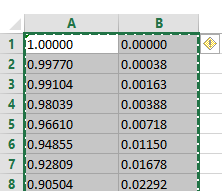 The resulting 2D o 3D curve, or 3D surface will be drawn.

AutoCAD & GStarCAD users: Get your now!

Or use the following secondary link, or go to the downloads page.

Get you ACTIVATION code.

ZwCAD users: Get your now!

Or use the following secondary link, or go to the downloads page.

Get you ACTIVATION code.

now!
Unlock YOUR FULL version of LitioLAB and start making all patterns right away!

For these examples, I picked the headform definition to test helmets as per ISO 16073 standard.

The standard defines a set of 3D coordinates as a function of an angle and a height. It is easy to copy and paste these data into an XLS file and do some XLS calculations to get the set of X Y Z coordinates of the headform definition.

So, I got these sets of points for three Headforms. For easier input, I have copied the data into a TEXT file, every point coordinate after the other.

So, for the first example I run LitioLAB and input the data belonging to the first set: the headform D.

The same for the next one, which is the headform G.

And finally, the same for the headform K.

These graphs can be used for CNC machining or 3D printing.

For these examples, I picked the coordinate data for several airfoils.

I just copy the coordinate data from this PDF and paste them into a TEXT file. And I start picking and copying the first set of data.

Then, I start LitioLAB and I choose the data import tool. I select the 2D coordinate option. And I paste the data I have already copied, to get a 2D polyline with an airfoil shape. I repeat the process for the other 3 sets of data.

Finally, I turn into the 3D space to make an example of a 3D Polyline. I pick a series of 3D point coordinates and I copy it. Then, I start LitioLAB and I pick the data import tool. I chose the 3D option and I paste the set of data I have copied before, to get a 3D Polyline.